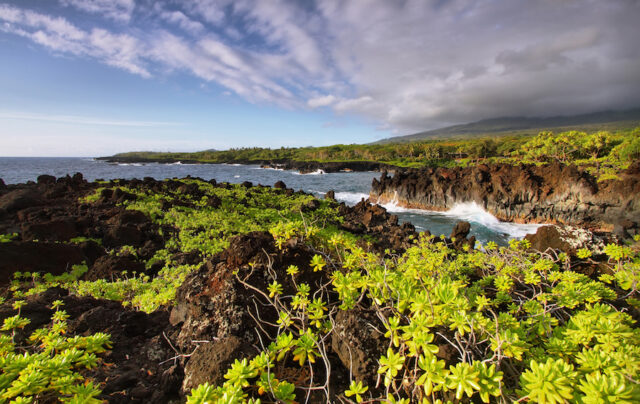 Maui is home to a pair of publicly accessible lava tube sites, including one that looks as if it’s filled with the cast off from a giant, chocolate fountain. One of the lava tubes is located within the confines of Waianapanapa State Park whereas the other sits off by itself. It’s known as Kaeleku Cave and you’ll have the opportunity to visit both locations providing your Maui vacation includes a trip along the Hana Highway.

Waianapanapa State Park’s lava caves and tubes are unlike Kaeleku Cave. For starters, one of them is partially filled with fresh water and native shrimp and is therefore known as an anchialine pool. Another opens up to the ocean and others serve as blow holes along the shoreline of Pailoa Bay. The shrimp filled pools are of particular interest to many visitors because of the lore attached. To learn more about the crustacean’s significance in Hawaiian literature, we recommend reading the story of Princess Popoalaea.

Located inside Ka’eleku Cave, there is a build-up of dark brown, lava deposits and this is just one of the location’s notable features. Geologists have determined that the color stems from assorted minerals and other materials, which were encased in the once flowing lava centuries ago. The cave also includes an ancient chockstone. Chockstones are one of the many reasons why lava tubes break open. They consist of nothing more than rock build-up that effectively blocks lava from rushing forward. Given how fast and strong lava flows can be at times, many people find it amazing that they may sometimes end thanks to a well-placed boulder or two.

To learn more about Maui’s lava tubes and other geological phenomenon, please contact us.

You are here: Home » Blog » Maui » Have You Explored The Maui Lava Tubes?