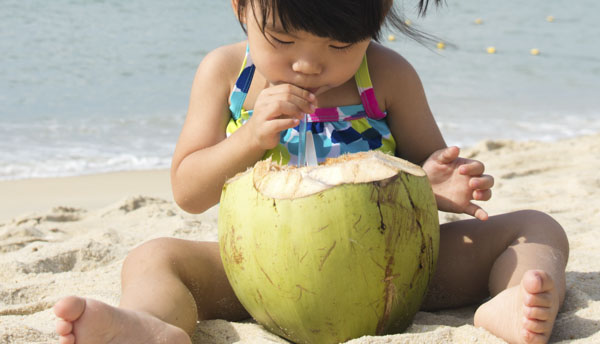 Although it seems like coconuts have always been a part of Maui’s landscape, it wasn’t until 2011 that scientists discovered something that proved otherwise. Perhaps not surprisingly, they used DNA to trace all forms of coconut trees back to two areas, one of them being Southeast Asia. Coincidentally, that’s where some of Maui’s earliest settlers came from. So it’s prudent to say that coconut trees have been on the island since around 1500 B.C.

In the early years, they were most likely used for clothing, eating utensils, tools, building materials, musical instruments and basic nutrition. But now, many of Maui’s entrepreneurs take the trees’ fruits and transform them into much loved treats. One such company is Maui Macaroons, which is currently located in Central Wailuku. They use Hawaiian coconuts, macadamia nuts and other fabulous ingredients to make a very large assortment of coconut macaroons. Of course they haven’t cornered the market on made in Maui, coconut goodies.

Many visitors and locals alike also love to stop by the Maui Coconut Station and sample their wares. Located on Honoapi’ilani Highway, they frequently host coconut husking demonstrations and serve the freshest coconut imaginable. Among their offerings are bags of dried coconuts, whole coconuts and coconut water. The bagged coconut is perfect for making Hawaiian trail mix, desserts, entrees and side dishes. Plus, it’s also just plain good when eaten straight out of the bag.

There are other places on the island where it’s possible to purchase fresh coconuts and watch demonstrations too. Among them are Maui’s many farmers’ markets and Lahaina’s Whaler’s Village. The long list of markets includes, but doesn’t end with locations on the island’s east, west and south sides. To learn more about them and other places where Hawaii’s farm fresh coconuts may be enjoyed firsthand during your next Maui vacation, please contact us.

You are here: Home » Blog » Food » Go Mad Over The Taste Of Farm Fresh Coconuts