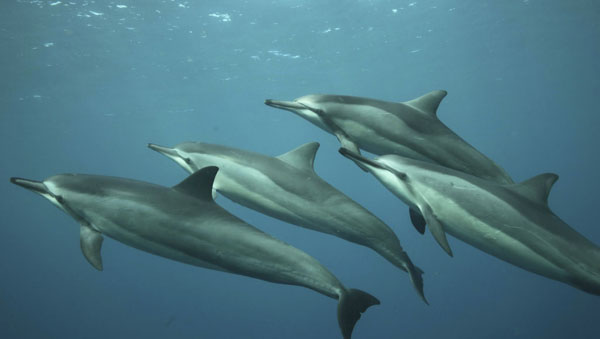 La Perouse Bay is situated slightly less than an hour’s drive away from our Maui condo. It’s south of the Ahihi-Kinau Natural Area Reserve and is a great place to in search of spinner dolphins. Although portions of the reserve are actually closed at this time, area boat charters are still able to take people to the bay. Some of the year round excursions also include opportunities to go snorkeling in Molokini Crater, which is a fabulous spot to see green sea turtles.

Maui’s spinner dolphins, also known as Stenella longirostris, tend to grow up to 7 feet long and weigh around 165 pounds. During the evening hours, they typically leave the sheltered waters of La Perouse Bay in mass and head out to feed on squid, shrimp and other aquatic life. As the sun starts to make its way back into view, they’ll return to La Perouse Bay for much needed siestas. Their siestas look much different from ours and generally end around late afternoon as they prepare to get ready for another night of feeding.

Unlike humans, when they sleep, they engage in milling behavior. Milling behavior is their way of getting that rest they need without falling victim to one of the many predators that roam around the mouth of the bay.Essentially, when they behave that way, they remain partially awake and swim lazily around the bay in predictable patterns. Subsequently, it’s a great time to watch them from a distance and take a few still photos.

As the sun starts to set, the spinner dolphins tend to increasingly become more active and begin putting on their characteristically rambunctious aerial displays. So it’s good to switch the DSL camera to an action setting or whip out the camcorder at that time. Otherwise, you’re apt to end up with a bunch of blurry shots. Of course once night falls, you’ll need a night vision camera to capture the spinner dolphins’ antics. To learn more about staying at our Maui condo and taking a tour of La Perouse Bay to see the dolphins, please contact us today.

You are here: Home » Blog » Kaanapali Beach » Feel At One With Maui's Spinner Dolphins